“Enhancing awareness doesn’t require a search-and-destroy mission against our internal fears or judgments. It only requires recognizing and acknowledging them.”

Only when we learn to see the ‘new’, in the ‘old’ will we arrive at a better understanding of the challenges we face in business, in society and elsewhere. I realized this when I moved to Vancouver BC, Canada, back in 2006. I was there for a couple years. It was an opportunity for me to learn, grow and explore OD consulting practices in North America. This was a big change for me as I had never lived in this part of the world before.

We rarely, individually or collectively, stop to think about the meaning and significance behind what we are observing and experiencing. Instead, we tend to react habitually to situations we face at work and in life. How most heads of states and institutions are responding to the prevailing global issues is a case in point. Today, we are witnessing degradation of our environment; the ever-growing social divide between the rich and poor; a global economic crisis; the potential dangers arising from biotechnology; and increasing ethnic and sectarian violence around the world. Can such unfolding events teach us something of value? They can, but only if we are willing to suspend judgment and reflect on what we ‘see’ carefully, and that too, with an open mind – free of bias.

While Canada is the same old world, how it works struck me as refreshingly new. Of the many new experiences, I would like to share the seemingly mundane example of public transport in Vancouver BC with you. Out there, as in Pakistan, people go about their daily business, but in very different ways. Regularity, predictability, courtesy, and precision are a norm. Even though I didn’t know my ways around the city, this fact posed no problem. For example, whenever I needed to go somewhere, I put a call to Translink (Vancouver BC’s public transport system). A very helpful agent always responded and enquired politely, “Where would you like to go; what time would you like to reach your destination; and where do you intend to start your journey from?” As soon as I conveyed the required information, I was given a detailed route plan – the train to catch – from where, and at what time; the bus number to take on arrival; time and location from where it departs; and the nearest spot to my destination at which to disembark. I ended up knowing my way from here to there in less than five minutes! And this convenience was available to all in this city. Relevant information was easily accessible on phone or the net. It made all the difference and was truly liberating.

Pakistan is a different ball game. Traveling in any of its major cities is convenient only for the few who have their own means of transport, although traffic and road conditions can be challenging at the best of times. The silent majority have to rely on public transport that is very unreliable and unsafe – an uphill task for the millions, every day, to make it safely and on time, from point A to B.

Reasons for this stark contrast appear to be self-evident at first. ‘Economics’… ‘Education’… I hear you say. But please suspend judgment. Pause. Reflect. Think deeper. The reasons for the stark differences are not necessarily the ones that come to our mind habitually.

We desperately need to enhance our awareness, by seeing and perceiving the situation afresh. In practice, this requires patience and a willingness not to impose our preconceived notions on what we are seeing. In the book, ‘Presence’ (page 31) an example is provided from when the economist Brian Arthur and his colleague, the sociologist Geoffrey McNicoll, were working in Bangladesh in the 1970s. “They spent months observing, gathering information, and ‘doing nothing.’ This was at a time when it was common for Western economists and institutions such as the World Bank to analyze needs of developing countries such as Bangladesh by simply applying traditional economic models without really questioning them. Eventually, Arthur and McNicoll developed a fresh understanding of how the ‘whole’ functioned. They showed how conditions such as landlessness and large families were self-reinforcing over time and how standard ‘band-aid’ fixes prescribed by international aid institutions only served to prop up the status quo.” This perspective helped shift focus of these institutions.

It might be worth asking why it is so difficult for us to change our attitudes and paradigms to seeing and understanding age-old problems we face in our businesses and in society. According to the authors of ‘Presence’ not being able to ‘see’ problems for what they are is universal. “Most change initiatives that end up going nowhere don’t fail because they lack grand visions and noble intentions. They fail because people can’t see the reality they face. Likewise, studies of corporate mortality show that most Fortune 500 companies fail to outlast a few generations of management not because of resource constraints, but because they are unable to ‘see’ the threats they face and the imperative to change.”

Just over a century ago, educated men came up with the concept of airships (like the famous Zeppelin). At the time experts could only ‘see’ lighter than air devices fly. Thank God, soon after, some people ‘saw’ otherwise, and we now have jet aircraft weighing over 600 tons, that are much faster and safer, connecting people all over the world. This possibility always existed. It was only when we ‘saw’ it through deeper awareness that jet planes and supersonics became reality. Many more breakthroughs in medicine, social justice, governance, communications etc., are hidden in nature’s infinite store of possibilities.

Consider this: It is the job of public servants to serve. Elected representatives come into office with the intent to serve the very people they were elected by. Wouldn’t it be nice, if our politicians simply passed a bill in parliament, making it mandatory for all government officials and their families to use the railways for domestic transport, use government run hospitals for all their healthcare needs, and send their children to government schools, colleges and universities for primary and higher education? Imagine the positive change this would make.

Status quo will prevail unless we learn to ‘see’ our old world with a new set of eyes. 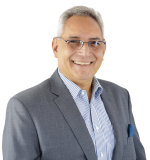