In the tide and storm of information we are blasted with daily, the ability to steer confidently toward ones goal is quite a feat. Even when one wants nothing to do with the television, there is someone at home who is watching and the sound gets caught. With the so-called educated (at least graduate) politicians yelling and even louder program hosts, the viewer is left ambivalently stunned between ridicule and hope. At work, there is a general disgruntlement with bodies coming to do a job; in social circles the hot topics are more of what the media is blaring; at public service offices there is clamoring for means to get more out of those that are served. Ride in a public bus and you are lucky to get a place on the roof; use a rickshaw or taxi and be prepared to pay through your nose; visit a police station to file a complaint and witness atrocities committed on the evil and innocent alike; stop at a traffic light and get inundated by beggars or blared by horns urging you to break the light, or even get robbed; go to a government hospital and behold enough sights to shock you forever.

Two questions come to mind – how did we get to where we are and how do we overcome this lone state of affairs?

The first is easy. Nature is naturally entropic, i.e. it is self-destructive. We are born to ruin. A body not cared for will decay faster; a garden not tended will suffocate in weeds; a house not looked after will rot; a community not able to care for itself, its people and its processes, will fade; a country or civilization that does not grow, implodes.

The way to counter entropy is conscious effort. The superior human brain is the only instrument that has the ability to be conscious [there may be other conscious beings in the cosmos we are yet not aware of. Consciousness is anti-entropy and pro-evolution. The greater the conscious effort, the more the chances of growth and prosperity.

In our daily lives, how does this work. Let’s say you are over-weight. You know you have not controlled your diet therefore you have reached this uncomfortable state. The doctor has declared you borderline diabetic and hypertensive. Now you wish to lose this weight to be healthy. It takes 30 minutes on the treadmill at 7 kmph to shed the number of calories one can consume in 5 minutes of drinking a cold-drink. Any and every effort you make to lose this weight is called a ‘conscious effort’; effort geared to break habits, to counter impulses, and to stop doing what you ‘want’ to do. Even the putting-on-of-weight was because you did not make a conscious effort about your eating habits. Habits are killers – they are your worst enemy.

Habits are for pleasure and not all pleasure is healthy. If you are not able to control your drive for pleasure, which makes you fat or lazy, then nature’s law of entropy takes over and your health is ruined. Imagine not brushing your teeth or having a bath for a week, what will become of you?

Such consequences are the end result of the scenarios described above; the ills of society. Whether it is the desire not to wait at a traffic light, or to give a bribe to a policeman to avoid a chalaan, corruption starts small, and then there are no limits. The black-and-white of morality start merging and we start justifying our actions. Entropy is justifiable; these are not reasons, they are excuses. Analyzing for reasons is a powerful intellectual exercise; justifications are ego-centric. The more we justify and blame, the bigger the ego grows. That’s when wrongs become the right way to live.

Having adults and seniors not living on integrity adds to the problem. I’ve seen, at school time in the morning, mothers and fathers driving their kids to school and, in their hurry, breaking the red light; people breaking the line at airport security queues, an act of injustice and depriving others of their rights. Thus, our children grow up with a confused mindset. We tell them to be honest and do justice, but demonstrate the opposite. We parents are the role-models of indiscipline in our society. Then why are we perplexed that our kids are poor citizens?

The country’s poverty is an indicator of this indiscipline. Where there are eight children plus grandparents to feed on the salary of two, we are breeding malnourished, weak and survival-only prone people. At times when I mention this factor; the over population that is under-utilized, as one of the causes of our conditions, people’s reaction is, “But this is the only form of entertainment poor people have,” and thus, we endorse and condone the ill. For these many people there aren’t enough jobs or big enough land-holdings to feed, so the increased crime, where one can hire an assassin for a mere Rs 2,500 tops.

Getting to the second question: How do we change our condition? Ultimately, life is pretty simple, we only complicate matters – the answer to this question, too, is easy. Like the oft-repeated Quranic verse that mentions change as being a consequence of self-change, the solution lies in doing the opposite of what we are doing today. Our actions must be reversed for the results to be transformed. Where we lie, we must speak the truth; instead of coming late, we must be on time; stop promising what we will not deliver; not break the queue or the red light; control the birth-rate and let everyone have the right to live a good quality life; respect public property and not spit on or write on walls; value the traditions, customs, religious beliefs of the other instead of bombing them to death or sawing off their heads; listen to each other instead of screaming to be heard above other screamers.

If it is so easy, why can’t we do it? There are two ingredients of the much-needed action. We often hear, at the conclusion of political talk shows that we lack the political Will to act on the solutions we are richly endowed with. Since decades it’s always been the Will that is to blame. In which store, mall or warehouse does one find the Will to make it happen? Where will it come from? Who will bring it and give it to us? Till when do we have to wait to have it? What will happen to us while we are waiting? Who is responsible for us not having the Will? Why don’t we have the Will? What should previous generations have done to ingrain the Will in us? And, if they didn’t do it, what do we have to do today so that future generations have the Will to lead the required change?

Again the answer is simple. There are two ingredients of the Will, patience and humility. Patience comes from empathy and humility comes from gratitude. Lack of empathy is due to plenty of selfishness and lack of gratitude is due to too much greed, which again is selfish. Selfishness is a consequence of fear, which is the basic emotion for survival and, for this purpose, is equal in humans and animals. Fear-ridden societies are either barbaric or decadent. Fear is inversely proportionate to faith. Faith-laden societies are civilized as they have hope and trust that their action will bring results. Fear-full societies have big egos (the pain-body, where it hurts to be kind, gracious and which forces us to do acts of injustice) and will always be dirty, as the ego makes us rigid and does not allow the back to be bent to pick up the garbage. Faith-full societies are less on ego and high on dignity (self-respect) and will be clean, as faith makes us flexible and bendable to ensure what is preached is practiced. The sense of dignity does not allow garbage to lie around; for the mouth to say a lie; for anyone’s right to be abused and for injustice to be committed.

Patience and humility or, in other words, empathy and gratitude, or yet in more words, faith, trust and hope are best inculcated in children till the age of three after which it becomes part of their character enabling them to practice these Godly qualities at the intuitive level. Every year, past this age, these character qualities become more difficult to instill. So we grow up with an Operating System (OS), and even a BIOS, that is devoid of these traits. These get hardwired in us and cannot be changed. As an Adult, we can manage this programming but not alter it. In managing it, we can consciously decide not to do that which we consider wrong but which is a habit. Gradually, this new trained response becomes part of our personality. Yet, anytime we are in a state of panic or respond under conditions of high stress, the old programmed OS will take precedence.

I am not talking about ‘Do or Die’, I insist it is ‘Be or Die’ as to Be is the richness of character – Khudi ko kar buland itna ……. (we all know this). It is not the ‘mai’ – the ‘I’ – it is the ‘khudi’. Therefore it is said, “Having is the substitute of Being,” and, thus, we fill our lives with the material instead of the spiritual – all that we will leave behind in this world and go to our next destination empty-handed.
The choice is ours, as are the consequences we will have to live with. 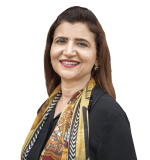